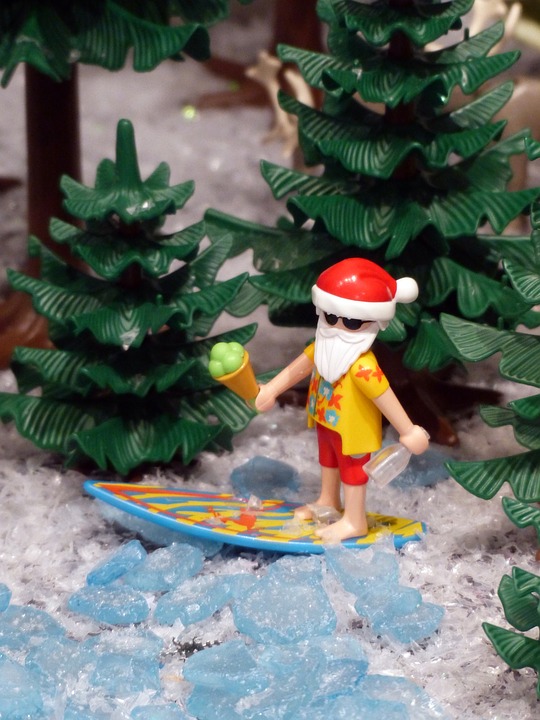 So the tinsel is on the tree and the presents have been wrapped, but as we look forward to the biggest day of the year, Santa eagerly awaits a well-earned rest. After spending the past few months busy making toys for children all over the world, Santa has decided to swap the snowy mountains of the North Pole for somewhere altogether sunnier before he must return to his grotto and start preparing for Christmas 2018! Along with Mrs. Claus, Santa may soon be grabbing his passport, jumping in his sleigh and whizzing off to one of these relaxing retreats…

With an average of 11 hours of sunshine a day, Melbourne offers a great alternative to the ice caps of Lapland, with annual temperatures peaking in mid-January.  However, it is not just those wishing for a short-term escape that can benefit from the Australian sunshine; Melbourne has fantastic transport links throughout the city for those looking to relocate for professional reasons, boasting a 16 line rail network and tram routes too.  The city also has 4 local airports, allowing the seasoned business traveller to jet across the globe, visiting family or attending work conferences. Melbourne is not just a great choice for Santa and his reindeer… Melbourne presents cheaper  and more affordable housing rent rates than Sydney and so for relocating professionals, Melbourne offers both work and leisure incentives to make the move down under.

Known for its frequent island ferries and beautiful harbours, Auckland in New Zealand is the perfect escape for Santa to recharge and get ready for the next Christmas countdown.  Although a far cry from the igloos of Santa’s hometown, Auckland boasts good availability of housing in the outskirts of the city and so for those looking to relocate; Auckland is an option seriously worth considering.  However, Auckland is not only a good choice for lone travellers. Due to its low crime rates and safe communities, Auckland is a good option for those looking to relocate with family members; Auckland has high quality healthcare and education systems and with more than 200 different ethnic communities residing in Auckland, Santa and his reindeer will be made to feel welcome!

For an option closer to Santa’s current home, Zurich, Switzerland offers great leisure opportunities for those who choose to relocate. With large lakes and various mountain ranges, Zurich may be the perfect home away from home for Mr and Mrs Claus this January. The city has a reliable transportation network and the trains are consistently on time, making the city very commuter-friendly for business professionals. In addition, on average, Zurich incomes are amongst the highest in the world and so it is not surprising that many choose to make a move here. Switzerland also attracts many organisations due to its low corporation taxes and so Zurich is a popular area for individuals relocating for a new business, vacancy or to escape the Arctic like Santa!

So now that the sleigh has been loaded with gifts, Santa is almost ready to hang up his coat for another year. As families all over the world are waking up on Christmas morning, Santa will already be somewhere far away, relaxing and preparing for 2018…Wishing you a Happy New Year ahead!